We had made arrangements to meet up with Michael for breakfast at the Cracker Barrel across the highway from our hotel before heading out for the day, and rode over on our bikes in the early morning drizzle. It was lovely to have a long conversation over eggs and biscuits and coffee, and we finally had to say goodbye and wished him well with his college reunion. Michael held up this sweet sign made by his mom, and a woman going into the restaurant told us to “stay safe” as we headed off into the rain.

This was our rainiest day of riding, and the rain was our constant companion from the time we left Richmond until we arrived dripping wet in Xenia. And it kept changing…first it was just sprinkling, then gently raining, and then it was pouring, and the rain pretty much stayed at a soaking level for much of our 64 mile ride, which was about half on roads and half on trails. We crossed into Ohio without much fanfare and rode past well-kept farms and ranches large and small on roads named “Lewisburg Road” and “Orphans Road”, which was an interesting contrast to the nearly-all-numbered roads scheme in Indiana. It was beautiful and also wet, and we took shelter in a covered bridge for awhile.

A regular challenge with traveling by bike comes in the form of detours. This crew kindly let us clamber over the train tracks near their resurfacing project rather than making us ride back to other roads. We were not so lucky later in the day when we got to Dayton, and had a complicated detour around a construction project that involved several bridges spanning the Miami River and bike trails on multiple levels; at one point we had to take off all of our pannier bags and carry the bikes up a long flight of steps and then carry up the bags and reassemble everything.

Getting into Dayton was a bit of a navigational challenge, through some pretty gritty streets, and then Dan’s rear tire went flat really suddenly. Turns out he ran over a sharp piece of glass so we stopped under the roof of a nearby grocery store to change the tire. It was a big greasy operation that involved pushing and pulling and multiple tools and a little blood; Dan’s tires are made of Kevlar on the sides and hardly ever go flat, so there is that, but when they do it is a big project to remount them. I handed out bandaids and wet wipes and tried not to shiver.

Our destination, Xenia, was at the intersection of six or seven different bike trails. Earlier today, after reading alarming reviews about the hotel where we were supposed to stay, I suggested that we take a look at some bike friendly bed and breakfast options instead, and we were able to book a room at the John Allen House, a twenty-five room house built on 1881 by a wealthy railroad magnate who was also a state congressman. We arrived later than expected because of the flat tire and detours in Dayton and tried not to drip all over the carpet once our lovely host let us into the house with a big, kind smile.

She told us that they had bought the house right before the pandemic and were in the process of redoing it, with plans to add a restaurant and more guest suites. Our room was incredibly spacious and comfortable and we were grateful to get into warm clothes. We walked downtown for some dinner and spent some time in the parlor after we returned, and had some delicious cherry pie and I fell asleep on the most gigantic chaise I have ever seen while Dan played on a guitar.

3 thoughts on “Day Eleven: Richmond IN to Xenia OH: Rain and rain and rain” 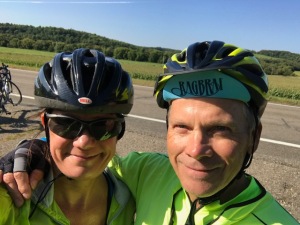