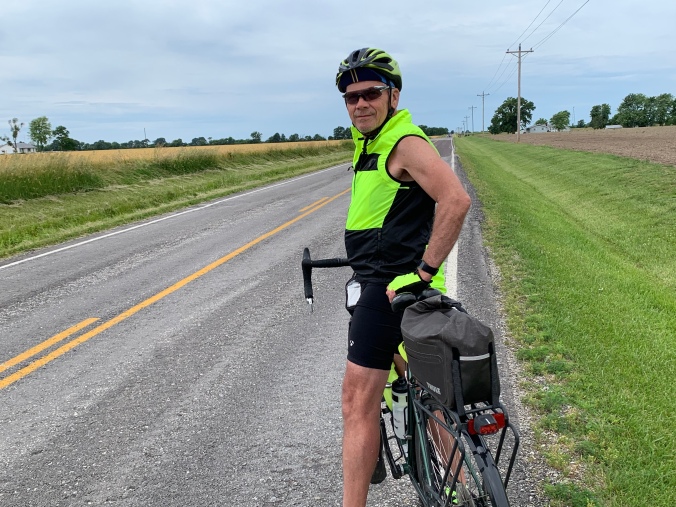 The original route for this ride was supposed to take us from Moberly to Arrow Rock — a historic site near the Missouri River that was the start of the Santa Fe Trail as well as a stopping point for Lewis and Clark — where we were supposed to camp for a night, and then from there we were to follow the Missouri River back to Columbia on the Katy Trail, touted as one of the most beautiful biking trails in the Midwest. Flooding along the river has closed roads in that area and parts of the trail, so the route was changed a few days ago and we basically turned around and retraced our second and first day rides through farm country and Mark Twain State Park and camped in the Perry town park again, before riding back to Columbia on Friday afternoon.

I stopped to get some lemonade when we returned to Perry on Thursday night (mmm, lemonade), and the cashier said “it’s just so weird to look at the park and see all of those tents.” And it must be, and it’s also a crazy cool aspect of these rides like RAGBRAI and BAM and BRAN and all of the other multi-day organized rides. You essentially have a caravan of travelers descend on a town and they are all dressed in fluorescent tops and tight shorts and shoes that make a clicky sound when they walk around and they set up this little tent village in a field and crowd the cafes and bars and stores in town, and then the next morning they are gone by 7 am.

Several of the people we met this week were either going on to another multi-day ride or had just come from one in another state. Dennis and Melanie, friends who rode a tandem bike and live in Kansas, also do the ride across Kansas every year. They finished well ahead of us on Friday and when I commented that they were awfully fast, given the wind, Dennis said “you know, if we didn’t ride when it’s windy, we would never ride in Kansas because there is always wind.” A couple of gym teachers from Rolling Meadows, IL with whom I chatted quite a bit were heading to a ride in Nebraska next week, and will be doing another in Wisconsin later this summer. There is the spirit of adventure together with a spirit of community on these rides and it is a lovely way to experience this country.

One of the pleasures of this particular ride is that there is live music every night in camp, and we heard some great performers this week. The Thursday night band drew a big crowd of locals who brought folding chairs and blankets and got up and danced or huddled together as the sun set and it grew kind of chilly in the park. The Kay Brothers joined up with the Burney Sisters, all self -taught musicians from central Missouri, and the 11 year old fiddler drew crazy applause. Kids in baseball and softball uniforms ran around and played on the playground equipment while their parents listened to the music and the chamber of commerce sold “crumbly burgers” which are the Missouri version of Iowa’s loose meat sandwiches and the music ended at about ten, when the residents packed up their chairs and blankets, and the cyclists climbed into their tents and then we all woke up at 4:15 am when a herd of cows started making a racket. Our early start Friday got us into Columbia early, exhilarated and tired, just as it started to rain.

The ride on Thursday — Dan’s birthday — was beautiful, perfect, really. We left the big park at Moberly and rode through city streets while kids with backpacks were waiting for school busses – summer vacation hadn’t started there yet – and waved shyly as we passed by. We had stops at the Union Covered Bridge and at Mark Twain’s birthplace, where we saw the cabin in which he was born as well as the handwritten conclusion of Tom Sawyer, and at Mark Twin Lake which wasn’t even there when he was alive; a dam was built on the Salt River and created the 30 mile lake. Some young girls were selling snacks and drinks at the top of a long hill on our route, hoping to raise money for a trip to Disneyworld, and we were glad to support them and cool off for a bit. 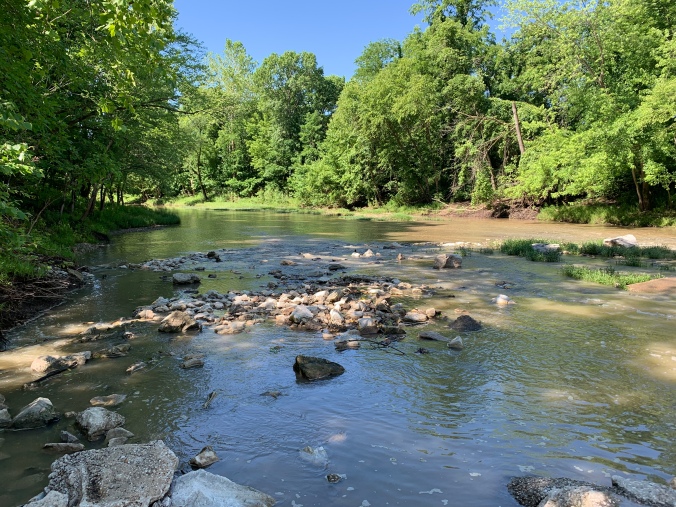 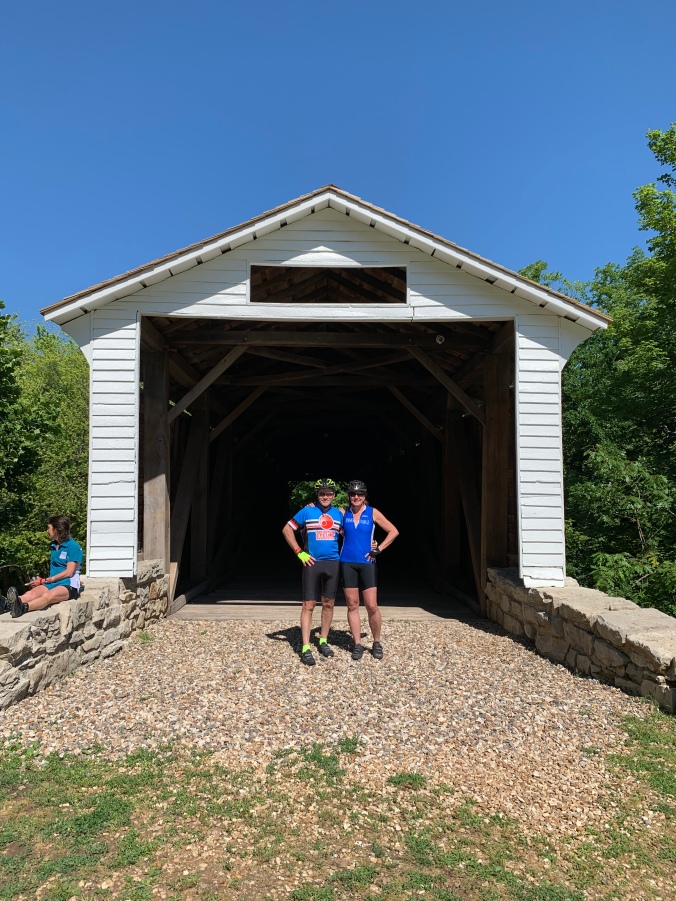 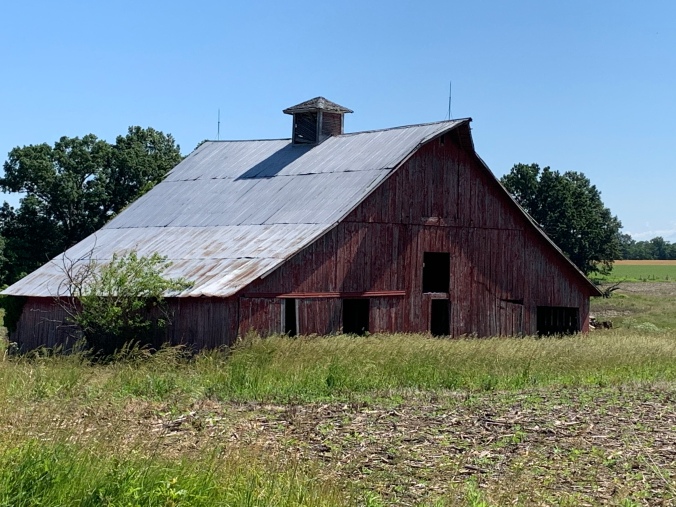 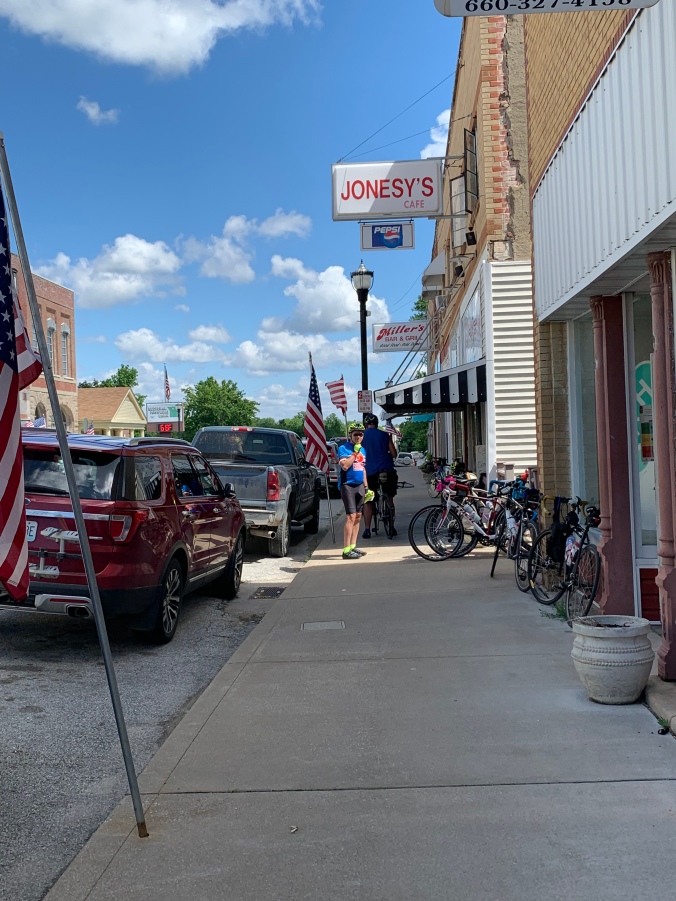 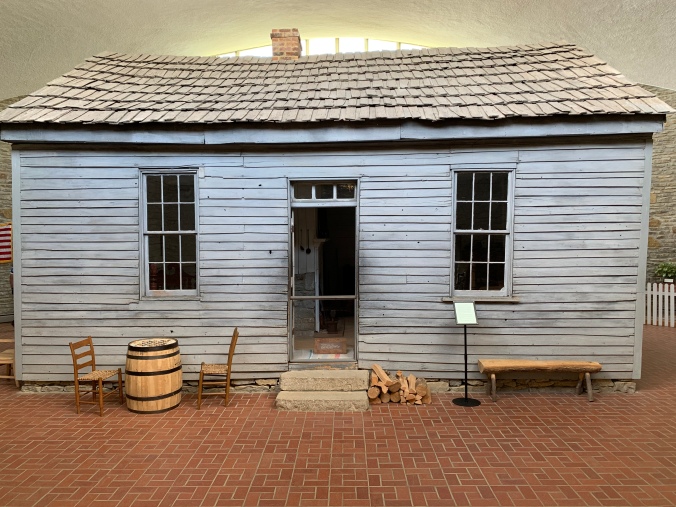 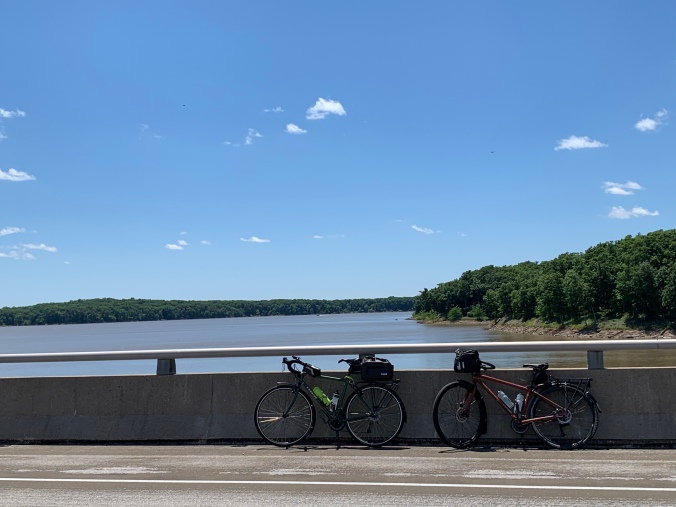 So at the end of this Big BAM, my legs are sore and my spirits are high and it will be a while before I am able to bike again … but it was very satisfying to ride for five days and travel 315 miles and meet people who came from all over the U.S. for this ride as well as the people living in the Missouri towns and cities we visited.

“Nothing so liberalizes a man and expands the kindly instincts that nature put in him as travel and contact with many kinds of people.”